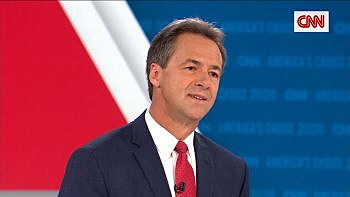 (MTN News) Montana Gov. Steve Bullock made his case for why he should be the Democratic nominee for president to a nationwide TV audience on Sunday. He answered questions from Democratic primary voters at an hourlong town hall in New York City, hosted by CNN.

Bullock is now the last state governor remaining in the 2020 Democratic field. He highlighted his record as a Democrat elected in a state that also voted for President Donald Trump, saying he had still managed to achieve progressive policy victories. He said the Democrats need to do more to appeal to voters in rural areas and other places that have moved away from the party.

Bullock criticized Trump for his policies on trade and for his actions on Russia and North Korea. He said the president had not done enough to condemn racism and racist violence.

“It’s giving license to people,” he said. “How I would propose to deal with it is in a difference in leadership.”

But Bullock also drew contrasts with some of his rivals for the Democratic nomination, suggesting some of their policy proposals go too far.

In responding to a question about gun violence, Bullock pointed to the loss of his 11-year-old nephew in a school shooting, and to the number of school shootings that have occurred nationwide since he became governor. He said he supported some additional regulations, including universal background checks and “red flag laws” that would allow courts to take away firearms from people ruled to be mentally ill. He argued those measures can win support from gun owners.

But he said calls for a mandatory assault weapon buyback program would play into voters’ concerns that Democrats wanted to take away people’s guns.

Bullock said he opposed a “Medicare-for-all” model that would eliminate private health insurance because it would end the employer-supported plans millions of people already have, and because it could raise taxes for all Americans. He said he wants to maintain and improve the Affordable Care Act, commonly known as “Obamacare,” and add a “public option” consumers could choose.

“The biggest stride we’ve made since Medicaid and Medicare was Obamacare,” he said. “I want to build on that, not start all over.”

Bullock said the debates on these and other issues can be directly tied to one of his number-one priorities: addressing outside spending and “dark money” in U.S. elections. He argued that more solutions could be found if not for the influence of groups like the National Rifle Association that spend heavily on elections. He said campaign finance and dark money can’t be considered fringe issues.

Bullock also reiterated he has no interest in running for the U.S. Senate seat currently held by Republican Sen. Steve Daines, telling CNN anchor Alisyn Camerota, “That’s an absolute no.” He said he has spent his entire time in public office in the executive branch, and that his skills are more suited for that.

This town hall could be an especially important national platform for Bullock, as he is considered unlikely to qualify for the next Democratic presidential candidates’ debate on Sept. 12. Candidates must both have more than 130,000 individual donors and receive at least 2% support in four national or early-state polls, and national news outlets say Bullock has yet to reach either milestone.